By clicking on the right button or simply continuing to browse on our website, only cookies that are technically necessary are activated. Further cookies (e.g. for statistical purposes) are only used if you actively select this in the privacy settings (CONVENIENCE or STATISTICS button). You can change your cookie settings for this website at any time here . You can delete existing cookies via your browser functions.

One of the most innovative systems on display at this year’s MSPO exhibition is the latest version of the Mission Master UGV from Rheinmetall, armed with the WARMATE Loitering Munition System. Rheinmetall has partnered with WB GROUP, Poland’s foremost defence contractor in the field of advanced technologies, to provide dismounted troops with high-precision strike capabilities.

As with other versions of Rheinmetall’s flagship autonomous vehicle, this new Mission Master – Protection is based on an 8x8 all-terrain platform capable of performing dangerous missions in hostile weather conditions, with the specific purpose of enhancing combat effectiveness. The integrated WARMATE micro combat unmanned air vehicle (UAV) opens up a range of new offensive and observation capabilities. It is capable of scanning the battlefield, detecting and determining exact enemy positions and, when the decision is made, engaging them. When an attack is aborted, the WARMATE can be recalled, can continue loitering, or be directed at another target.

Even more exciting, the new Mission Master – Protection features the first ever tube-launched system equipped with several WARMATE UAVs for performing surgical swarm attacks. This dramatically increases the unit’s combat power, while simultaneously augmenting the safety of dismounted troops in close combat operations as the whole system can operate out of the line-of-sight. “The use of micro combat UAVs on our Mission Master UGVs is an incredible opportunity for ground commanders” says Alain Tremblay, Rheinmetall Canada’s vice-president for business development. “Being able to observe hidden targets and conduct precise identification before initiating a surgical strike with minimal collateral damage is a real tactical advantage on today’s battlefield. And since both the Mission Master and the WARMATE are able to conduct certain autonomous operations, it reduces the number of military personal required and lets troops focus on mission success”, explains Tremblay.

Operators can command both the UGV and UAV from a mobile ground control station; a modern soldier system such as Rheinmetall Argus; or with Rheinmetall Command and Control Software installed in any user’s battle management system.

Visitors to MSPO 2019 won’t want to miss this opportunity to see for themselves the brand-new version of the Rheinmetall Mission Master – the future of unmanned ground vehicles, on display today. 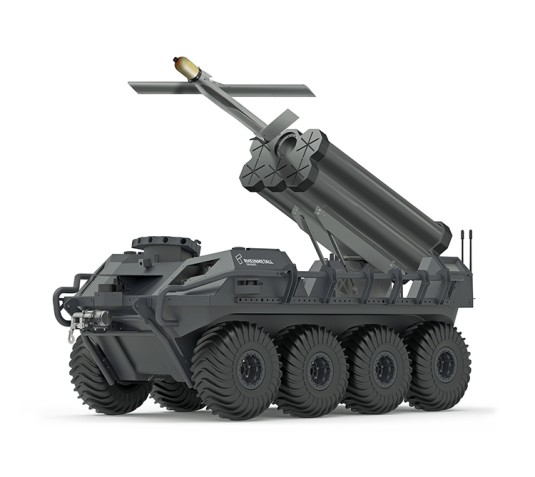 We place great importance on transparent information relating to all aspects of data protection. Our website contains detailed information on the settings you can select and what effect these settings have. You can change your selected settings at any time. Regardless of the selection you choose, we will not draw any conclusions regarding you as a person (except where you have explicitly entered your details). For information on deleting the cookies, please see the help function in your browser. You can find out more in the data protection declaration.

Change your privacy settings by clicking on the corresponding buttons

These cookies make the website easier to use and save settings, for example, so that you do not have to repeat them every time you visit the site.

Statistics cookies enable us to evaluate the usage behaviour on the website anonymously – without enabling any conclusions to be drawn about you as a person. This enables us to measure the performance of the website and to improve it continuously to offer a better user experience.


Notice regarding data transfers to the USA

If you select "STATISTICS", cookies from the US-based company Google Inc. will also be used. By selecting this option, you also expressly agree in accordance with Art. 49 Para. 1 S. 1 lit. a GDPR that your data collected by these cookies can also be processed by Google in the USA. The European Court of Justice (ECJ) has qualified the USA as a country with a level of data protection inadequate to EU standards. Further information on Google's handling of data protection can be found here.


Of course, we will always respect the do-not-track (DNT) setting in your browser. In this case, no tracking cookies are set and no tracking functions are loaded.